The City Bar Chorus is led musically by musical director and conductor Kathryn E. Schneider and accompanist Matthew V. Grieco. The administrative needs of the chorus, including arranging shows in outreach and other venues, recruiting members, and facilitating networking, are handled by the City Bar Chorus Committee, chaired by Dana M. Catanzaro.

Musical Director & Conductor Kathryn E. Schneider, Vice President & Deputy General Counsel at Medidata Solutions, has worked professionally as an organist and choral director since her early teens. While attending Columbia Law School, she served as Assistant University Organist and was Vocal Director of the Columbia Law Revue shows and cabarets. Kathy took graduate-level choral conducting classes at Westminster Choir College and Teachers College, Columbia University, and studied organ at Columbia with George Stauffer and Mary Monroe. Kathy has been musical director of the City Bar Chorus since 1996, after having served as accompanist for the CBC’s first three seasons. Kathy was Co–Chair of the City Bar Chorus Committee from 1996 to 1999 – through which she got to know her husband, Paul Getzels, then her Co–Chair and now bass 2 section leader – and has also been a member of the City Bar’s Information Technology, Securities Regulation, and Thurgood Marshall Summer Law Internship Program Committees. Kathy studies voice privately with acclaimed soprano Harolyn Blackwell.

Accompanist Matthew V. Grieco, Chief Court Attorney of the Appellate Division, First Department, is a classically trained pianist. At Brown University, he was a member of the Applied Music Program, Chamber Music Society, and Orchestra (where he played violin), and studied piano with Conrad Strasser and Marilyn Neher. At Columbia Law School, he was pianist for the 1992-94 Columbia Law Revue shows and cabarets. Matthew has been accompanist of the City Bar Chorus since 1996. Matthew also plays at general meetings of the Columbian Lawyers Association of New York and substitutes at St. Stephen of Hungary Church. 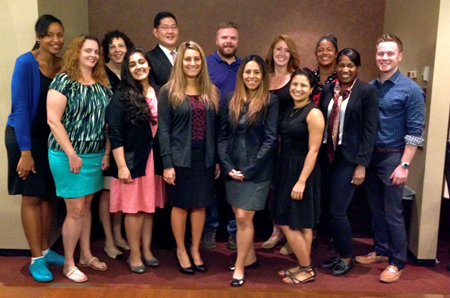