The City Bar will be (virtually) closed on Monday, January 18, in observance of Martin Luther King Jr. Day. The City Bar’s building is open on a limited, appointment-only basis. To schedule a visit, and for the latest on how the City Bar is responding to the coronavirus, click here. 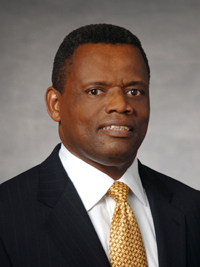 Some Dirt. Some Lawyer.

Most know MetLife as the largest life insurer in the United States, or as Snoopy’s current employer. Not quite as well known is the enormous influence the company has had on New York’s skyline, and in real estate across America and around the world.

The company’s second headquarters, at One Madison Avenue (23-24 St.), was built in 1909 and was the world’s tallest building until it was topped by the Woolworth Building in 1913. (In 1988, Godzilla had his way with the MetLife tower, and in 2002, Spider-Man maneuvered around it in a video game.) In 1929, a construction loan from MetLife saved a major project that was teetering on bankruptcy: the Empire State Building. In 1931, MetLife was instrumental in financing the creation of Rockefeller Center. And in 1980, MetLife’s purchase of the Pan Am Building at Grand Central was the largest purchase of a single building in history.

One person who, for the past 38 years, has had quite a bit to do with MetLife’s real estate business is James Lipscomb. He spoke with 44 th Street Notes recently at his office high above Bryant Park in 1095 Sixth Avenue, where MetLife signed a long-term lease for 410,000 sq ft in December of 2006. Few will recognize the building as the old New York Telephone/NYNEX headquarters due to the complete overhaul it underwent in 2007. Fewer still know that MetLife previously owned it. It was the first building Lipscomb purchased for the company in 1973.

“I am a frustrated architect,” says Lipscomb. “I like buildings, and I like building things.” But when he discovered architecture was not for him, Lipscomb went to law school to learn about real estate. “I liked going out and kicking the tires, so to speak. I learned how to read a survey, execute deeds and covenants as well as understand restrictions that affect title to the land. I became what’s known as a ‘dirt lawyer.’”

Lipscomb figures he’s played a role in major real estate deals in every major city in the country, and in 48 of the 50 states. He fondly recalls a deal he did in Hawaii in the 80s, when Japanese companies were on a real estate shopping spree in the U.S.

“I sold a hotel in Maui that was performing poorly to a Japanese outfit for a handsome profit,” he recalls. He knew he had them on the hook because they had paid a tidy sum to a company that was in contract to buy the property from MetLife but couldn’t get financing.

“So they bought the rights to negotiate with us from these people who had nothing to sell, but they bought it anyway, and I say, if they're going to do that, then they're going to sign our deal. And they say, well, we want to look at this issue, that issue, and I said, no, you have to take the deal as it is or there's no deal. And they thought I wasn't serious, so I got up and I walked out—the usual, you know, walk-out scene—and after half an hour they came to find me—‘Wait up!’ (laughs)—It was an incredible deal.”

MetLife is the only company Lipscomb has worked for since graduating from law school, but real estate has been only one of his responsibilities. At MetLife, he worked in an in-house think tank for a few years, where the seeds of some major future changes in the company were first planted, including the company’s going public and its embrace of new distribution channels for its insurance business that would have been heresy to contemplate at one time.

After an 11-year stint in California, he returned to New York where he had assignments in the think tank, real estate investments and corporate planning before becoming the CEO of a MetLife subsidiary, Conning Corporation, in Hartford, Connecticut, Lipscomb returned to New York three months before 9/11.

Lipscomb has lots of 9/11 stories, many not good, but there’s one he likes to tell. In January of 2001, while still at Conning in Connecticut, he recruited a man who worked at a broker/dealer located in the World Trade Center.

“He was about 40, and nervous about making this move, since he had 18 years with his employer and had never moved before. He finally agreed and I signed him to a long-term contract—I think it was four years. And two months after I signed him to that contract, I entered into a contract to sell the company. So when the sale was completed in June of that year, the buyer terminated him and paid him out on his contract. 9/11 comes along and pretty much destroys the company that he used to work for, but not totally. So after 9/11, they hired him back. So by Christmas time of 2001, he was back in his old job, in the same company, with four extra years of salary, and he missed being in the building when it went down.”

Lipscomb’s office is conveniently located just two blocks from the City Bar, where he has been active for decades, working on and then chairing the Real Property Law Committee, and serving two terms on the Executive Committee, one as Treasurer.

“I joined because I knew that what I needed to learn was beyond just the confines of this job. I've encouraged our lawyers at MetLife to do the same, because you want to make sure that you stay abreast of what's happening in your area of expertise, so you can be as competent as you possibly can. You only get that by being involved with people who are actually out there in the marketplace.

“And in order to do that I needed to join a bar association that had a reputation for quality, for excellence and a broad breadth of opportunity. One of the many things that make the Association what it is today is that over the years we've had people come and go, but we've had just an excellent staff that has been very supportive of the membership there. And that has made all the difference in the committee work and in the events and in the responses we've been able to have. Anybody who's ever been involved with the Association knows that the underpinning to making things happen there is having competent people in the administrative jobs helping in the way they do. I've been in other associations and our association I think has earned its reputation, in my view, for being number one in the country.”

Lipscomb’s public service includes a commitment to a part of the world much in the news lately: Haiti. He is a founder of, and benefactor and fundraiser for, the Center of Hope ( Haiti), Inc. orphanage (www.centerofhope-haiti.org), which is under construction in Hinche, some 80 miles from Port au Prince. The orphanage will house 100 children and have a school for 200. Even before the earthquake created an increase in the number of Haitian orphans, there were an estimated 380,000 orphans in a country with a population under nine million. Fortunately, the construction site was not directly affected by the earthquake.

In his spare time, Lipscomb, perhaps honoring his inner architect, likes to “doodle” and paint. About five years ago, he began putting his ideas down on canvas. Recent works include a painting for his daughter’s 25 th birthday that is laden with symbolism that she is still trying to decode, as well as a self-portrait.