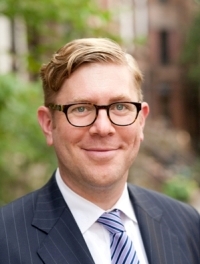 Emerging From Big Law as
a Solo Practitioner

Brian Esser had established himself on a prestigious career track. After graduating from American University Washington College of Law, he served as a clerk in the DC Superior Court for the Hon. Rafael Diaz (Ret.) before going to Arnold & Porter in Washington, DC and later, Baker Hostetler in New York. In his time at both firms he engaged in complex litigation involving bankruptcy, the Foreign Corrupt Practices Act, and several high-profile white collar cases. Yet, Brian felt the urge to start on a different path.

"I spent a lot of time thinking about what would be a good fit for me and I decided that what I really wanted to do was help people build their families," Brian said. "I'm an adoptive dad – my son is almost 3 years old – and I learned a lot about the process of adoption, as well as surrogacy and assisted reproductive technology as my husband and I were trying to decide how to start a family. I felt that I had a lot to offer and would be good at it." So in January 2014, Brian launched his solo law practice, specializing in family law pertaining to issues of surrogacy, adoption, assisted reproductive technology, and trusts and estates planning. Like any entrepreneur, Brian felt excitement and a bit of trepidation at building his new firm. "The idea of starting my own solo practice was really daunting. I wasn't sure that I had the business acumen to do it, so I leaned on the City Bar and other resources to get me started. I'm learning that it's both easier and harder than I expected, but 100% worth it. I've never been happier or more fulfilled as a lawyer."

Brian's relationship with the City Bar, particularly with the Small Law Firm Center (SLFC), has proven to be a significant asset in building his new business. Although his office is based in Brooklyn, he frequently uses the tools available to members through the SLFC and the City Bar's Library. "Things I took for granted before I started my solo practice—free access to WestLaw, availability of conference rooms—are invaluable to me now," Brian says. It isn't just the physical space, but the programs available to solo practitioners that have aided Brian and other solo practitioners in starting their business. Brian described the November Small Law Firm Center Symposium, an all-day conference marketed to small and solo law firm practitioners featuring instructional workshops and networking, as "Fantastic. The speakers brought nuance and life to several issues I had not been as exposed to." The Mentoring Circles—which brings together a small group of experienced and newer attorneys to help one another to develop professional and business skills—have also proven to be beneficial to Brian. Joining the Family Law Mentoring Circle introduced Brian to people and resources that have helped him build the infrastructure of his new practice. "The Mentoring Circles have helped me develop strong business contacts" he said. One of Brian's fellow mentoring circle-members has helped him network within their shared neighborhood; another has started collaborating with him in marketing their respective practices and creating presentations to parenting groups in Brooklyn.

Brian's relationship with the City Bar has not just been beneficial to him, but also to the City Bar. Brian first joined the City Bar in 2011. "I'd heard about the City Bar before I moved to New York and I was blown away by the gorgeous building and the generosity of the people I met here," says Brian. "I was interested in what the City Bar was doing in diversity and inclusion issues and working on those issues." Shortly after joining the City Bar, Brian was appointed to the committee that selects the Diversity of Inclusion Champion Award recipients. As a member of the Committee, Brian works with a professionally and culturally diverse group of lawyers to select the award recipients. Each year, the Award is presented to recipients who help foster a more diverse legal community and inspire dialogue on these issues. In recalling last year's presentation, Brian said, "To hear a discussion of LGBT rights advocacy and religious discrimination in the same room was a very moving experience." When Brian's term on the committee comes to an end, he plans to continue working on diversity issues with other City Bar committees.

"I don't think I came in with a preconceived set of goals. As I became more familiar with the different programs at the City Bar, I became more and more immersed in the place. People go out of their way to make the bar association a very warm, welcoming place; it creates an environment for attorneys to meet outside their initial network. It's a nice feeling."