The City Bar’s building, library and office hours are 9:00 a.m. to 5:00 p.m., except for scheduled events, programs and meetings.

The New York City Bar Association (City Bar), founded in 1870, is a voluntary association of lawyers and law students. Since 1896, the organization, officially known as the Association of the Bar of the City of New York, has been headquartered in a landmark building on 44th Street, between Fifth and Sixth Avenues in Manhattan. Today the City Bar has over 25,000 members. Its current president, Sheila S. Boston, began her term in May 2020.

The City Bar’s mission is to equip and mobilize a diverse legal profession to practice with excellence, promote reform of the law, and uphold the rule of law and access to justice in support of a fair society and the public interest in our community, our nation, and throughout the world.

The City Bar was founded in response to growing public concern over corruption in the justice system in New York City. Several of its early officers were active in seeking the removal of corrupt judges and in leading prosecutions of the notorious Tweed Ring. By the 1960s, the Association became an increasingly democratic organization, easing restrictions on membership and actively engaging in social issues. The Association hosted Dr. Martin Luther King, Jr. and Chief Justice Earl Warren, among others, and actively campaigned for policy initiatives. It also played an important role in two controversial confirmation battles in the United States Supreme Court, over G. Harrold Carswell in 1970 and Robert Bork in 1987.

From the 1980s onward, the City Bar has continued to diversify its membership with active recruitment efforts among women and minorities and to expand its involvement in access to justice initiatives, international human rights, and pro bono representation in many areas, including immigration, homelessness, and criminal justice.

Through its nonprofit affiliates in the City Bar Fund, the City Bar Justice Center and the Cyrus R. Vance Center for International Justice, the City Bar provides pro bono legal services in New York City and supports the creation and expansion of pro bono and access to justice in other countries. The other two programs in the City Bar Fund, the Office for Diversity and Inclusion and the Lawyer Assistance Program, respectively foster more diverse and inclusive work environments in the legal field and provide services to those in the legal community suffering from addiction or mental health issues.

The City Bar Center for Continuing Legal Education is an accredited provider in the States of New York, New Jersey, California and Pennsylvania, offering over 150 live programs a year, as well as audio and video tapes, for members and non-members.

The Legal Referral Service, jointly sponsored by the City Bar and the New York County Lawyers’ Association, provides free initial telephone consultation to the public, as well as a free referral to experienced, pre-screened lawyers with expertise in a wide range of specialties. 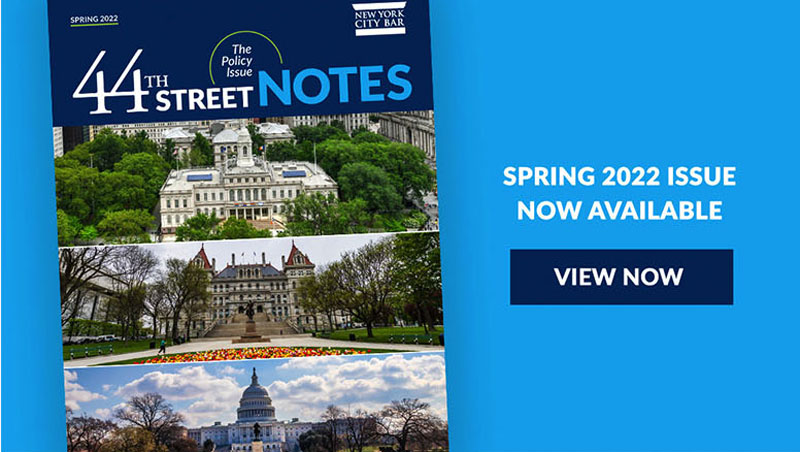