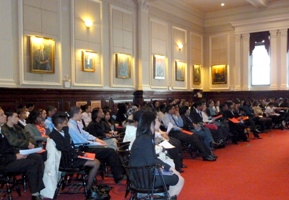 Thurgood Marshall interns on the set with Channel 2 news

On Tuesday, August 10th, John W. Marshall, son of legendary civil rights lawyer and jurist, Thurgood Marshall, spoke of his father's triumphs and his lasting legacy to a crowd of over 200 interns, employers, families and friends at the New York City Bar Association. (Read full story)

Thurgood Marshall Summer Law Internship participants were addressed by Professor Jack Greenberg, formerly the Director-Counsel of the NAACP Legal Defense Fund and the co-counsel of Thurgood Marshall in Brown v. Board of Education. (Read full story)

Then President of the Association, Patricia M. Hynes, dedicated her President’s Column of the City Bar’s 44th Street Notes to discuss the importance of the Student Legal Education and Opportunity Program and its impact on the next generation of attorneys. (Read full story)

Rakim Brooks, Thurgood Marshall Alumnus from the Class of 2005 was named Rhodes Scholar as a senior at Brown University. (Read full story)