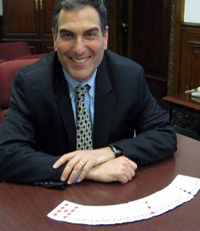 Some thirty years ago, while at Yale Law School, Peter Kougasian applied for a job with District Attorney Robert Morgenthau. Kougasian remembers the first question the legend asked him as if it were yesterday: “Are you Armenian?”

Kougasian was puzzled by the question until he learned about the Morgenthau family’s extraordinary connection to the Armenian people. Henry Morgenthau, Robert’s grandfather, had barely taken up his post as Ambassador to the Ottoman Empire in 1913 when he heard about what came to be known as the Armenian Genocide. It became the cause of his life, which he passed on to his son, Henry Morgenthau Jr., Treasury Secretary and War Refugee Board principal, and then to his grandson, Robert, and, says Kougasian, right on down to the DA's grandniece.

“It has to be one of the most remarkable stories in world history,” says Kougasian, “that one family would become so passionately devoted for five generations to the plight of a small, forgotten people.”

It was Kougasian’s brush with DA Morgenthau the previous day that had led to his interview. Kougasian had planned to be a criminal defense attorney. If anything, he figured, he’d work as a prosecutor for a few years at most, which was considered good training for future defense attorneys. “And then I met Robert Morgenthau,” he says.

Kougasian had attended an “alternative career night” at which Morgenthau spoke, and the transformative moment for Kougasian was Morgenthau’s answer to a student who asked, “How can you enjoy putting people in jail for a living?”

Morgenthau replied, “’Never forget that the victims of crime are disproportionately poor, minorities, and the disenfranchised,’” Kougasian recalls. “‘Don’t think that by being a prosecutor you are championing one set of class interests over another.’ He said that being a fair prosecutor is in fact giving many people the only chance they have of a meaningful life. I was so impressed with that answer because, first, it resonated with me, but also because it was unresponsive to the question. Rather than take what was a personal attack on his character, in the key signature in which it had been delivered, he understood what was motivating the question and addressed that. Like a lot of people, I was dazzled by Robert Morgenthau.”

You didn’t have to be Armenian to get a job with Morgenthau, but it didn’t hurt Kougasian. He joined the office, along with a classmate from Yale with whom he’d studied for the bar named Sonia Sotomayor. “It seemed like she was half a step ahead of all of you,” Morgenthau told Kougasian not long ago, to which Kougasian replied, “Mr. Morgenthau, she was a full step ahead of us.”

Kougasian never did become a defense attorney; today he’s a Bureau Chief in the Trial Division in the Office of the Special Narcotics Prosecutor, which may seem far afield from his original goal. But he cites Morgenthau’s approach to prosecution as satisfying the impulses that drew him to criminal defense. “In an office like the New York County DA’s office, if you have concerns about the defendant’s guilt, or about whether prosecution is the right thing to do, you can get permission to dismiss the case,” says Kougasian.

While his first thirty years were under Morgenthau, Kougasian notes that his last six days have been under Cy Vance Jr., whom he got to know while working together in the office, and whose approach he thinks will be consistent with Morgenthau’s in many ways. “I think he has a very enlightened perspective on what a prosecutor does,” Kougasian says of Vance.

This approach to the prosecutorial function that Kougasian talks about has less to do with simply locking up offenders than with the office’s overall mission of preventing crime and keeping citizens and communities safe. As such, he has been influenced by experiences like a Criminal Justice retreat he participated in called “The Effects of the Criminal Justice System on the Family.”

Kougasian says, “When you’re arraigning a man for selling drugs, and you’re making a bail application, it’s easy to make the assumption he has no children, or there’s a woman involved somewhere who will take care of the children when he goes to jail. But what if he has sole custody of the children? What if the mother is a drug addict and unfit to care for the children? Or what happens when you look and see that a defendant is 17 years old? What additional issues does that bring to a case? If what we’re trying to do is prevent crime and rehabilitate offenders, to protect society, those are exactly the kind of questions that are going to help us.”

The conference was sponsored by the City Bar, where Kougasian has been a member since 1985, when he received a call from a complete stranger named Susan Powers. She was chair of the Corrections Committee, had heard of Kougasian, and persuaded him to join the committee, and the Bar.

Kougasian had a transformative experience working on a pioneering report on HIV/AIDS (a joint project of the Corrections Committee and the Criminal Justice Operations and Budget Committee). In those early, uncertain years of the epidemic, few knew the difference between being HIV positive and having AIDS, and only a small percentage of those diagnosed with AIDS lived past two years. There was rampant mistreatment of afflicted inmates in the prison system. “There were cases of people being arraigned in a parking lot, guards wearing masks around HIV positive inmates, and often if an HIV positive inmate was awaiting trial, the defendant would not be produced in court, and all parties would push it back and push it back and wait for the person to die,” says Kougasian.

Kougasian and his colleagues on the committee—including Faith Colangelo; Judge Richard Andrias; and Katherine O’Neill, who drafted their report—toured a facility on Rikers Island where AIDS-afflicted inmates were held in squalid conditions. Their report was featured on the front page of The New York Times, and, while focused on the treatment of inmates, it also served as something of a public health document. “People who read it, like never before, saw the impacts of HIV/AIDS as a public health concern,” says Kougasian.

By the time the report came out, the committee chairmanship had turned over to Kougasian. And like many before and since, he became hooked on committee work and on the bar. “I remember the first time I walked into the building—it was so ornate and ceremonial. Twenty-five years later, it’s much more diverse and like a second home,” he says.

Kougasian is proud of his efforts to help reform the bar exam as a member, and chair, of the Committee on Legal Education & Admission to the Bar. Kougasian says he was confident then, and remains confident today, that if he took the test he would fail. The problem, he says, is that the exam has always over-tested in substantive practice areas, but under-tests in the skills required to be a lawyer: client interviewing, client counseling, and oral advocacy. If nothing else, every future New York lawyer can thank Kougasian and his colleagues at the City Bar, and the State Bar, for no longer having to travel to Albany to view one’s test results, dragging along a member of the bar who had to swear he or she was not employed by a bar review service. “You had to take the train up to Albany to view your test results in a small, rented room,” Kougasian says. “It was the most depressing trip you could imagine.”

Kougasian also ran a program in the DA’s office for people who had failed the bar exam. “We would have a reception, and the first part of it was a parade of the most distinguished and brilliant lawyers in the office, the crème de la crème, who would stand up and say, ‘I flunked the bar.’” Among those he counseled on the matter was John F. Kennedy Jr.

Eventually, Kougasian worked his way up to Chair of the City Bar’s Executive Committee, where he particularly enjoyed the challenge of refereeing “brilliant but conflicting” committee reports, and where he recalled his entrée to the Bar and implored his fellow members, “Every one of us here should call up one young lawyer, whom you know only by reputation, and invite them to join the Bar.”

There’s one other committee Kougasian insists on mentioning. He recalls a telephone call from Barbara Berger Opotowsky, the City Bar’s executive director, in which she asked him to chair the Subcommittee on Committees. He told her he’d consider it, hung up, then immediately called her back with an insight he’d just had: the name of the committee could be sung to the tune of “ Carolina in the Morning.” “The Bar of New York City Subcommittee on Committees in the morning,” he sang into the phone and accepted the assignment.

Which brings us to the seriously fun side of Peter Kougasian. This crime fighter by day is a magician by night. A real one. There are magicians who have no idea he's a lawyer.

The spark came in college, when he was in Philadelphia researching a paper on the effects of transit subsidies on the poor. He wandered into Kanter’s magic shop (“Now defunct,” Kougasian says) and saw close-up sleight-of-hand magic for the first time. That was it. He gave up the violin to practice magic.

He auditioned at Magic Townhouse (“Now defunct”) where he became a regular for six years, then moved to Mostly Magic (“defunct”). He always starts his act with the line, “I’ve been performing magic for 30 years, and every place I’ve performed in up till now is a Starbucks.” He was featured in a memory book written by the legendary magician Harry Lorayne, the guy who can remember every single audience member’s name. Kougasian used the memory system to help him keep track of cases in his day job.

Kougasian is now a semi-regular performer at the famous Monday Night Magic show at the Bleecker Street Theatre. His bio on the website reads in part:

“Kougasian opened the performance and acted as host. His charming personality and contagious enthusiasm quickly permeated the room and roped the audience in for the start of the show. This was vital, as in a matter of minutes ‘Uncle Pete’ took us from a fidgety crowd on folding chairs to an enraptured and engaged audience prepped for the ‘miracles’ to come.”

That's actually a not inaccurate description of what Executive Committee meetings under Kougasian were like, according to several people in attendance.

On being a prosecutor, Kougasian paraphrases the author Janet Malcolm, who described psychoanalysis as the “impossible profession.” “Prosecution is too,” says Kougasian. “To do it really well requires a set of skills no mortal has.”

Maybe you need to be some kind of magician.