The City Bar will be closed on Monday, the Fourth of July, for Independence Day. Until Labor Day, the City Bar’s building will be closed on Fridays (with staff working and programs taking place virtually) and open Monday - Thursday from 9:00 a.m. – 5:00 p.m. 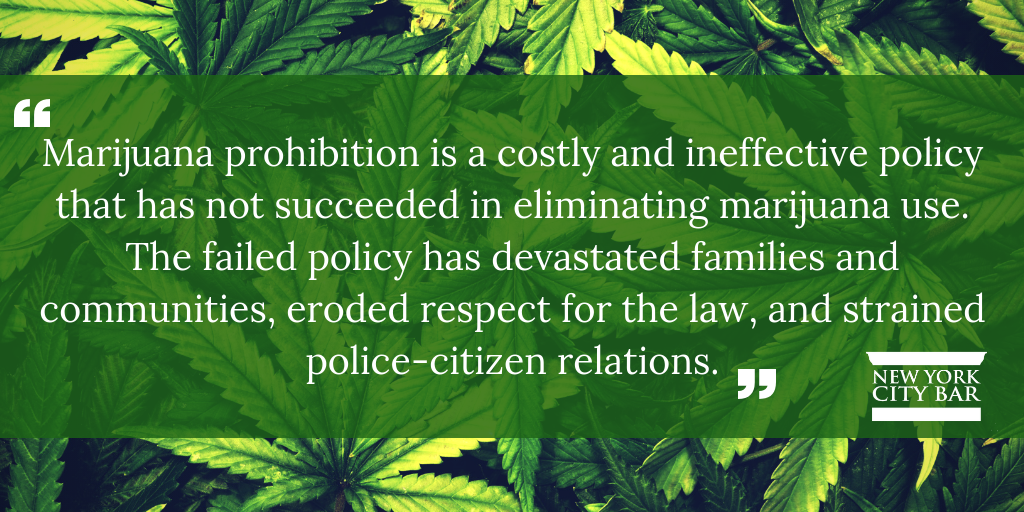 Update: The Marihuana Regulation & Taxation Act Was Signed Into Law by Governor Cuomo (Chp. 92) on March 31, 2021!

The New York City Bar Association, through the work of its Drugs & the Law Committee, supports the creation of a system for the production, distribution and adult non-medical use of marijuana in New York State. The Drugs & the Law Committee was formed in 1986 to research and analyze why the criminalization of drug use, manufacture, and distribution had neither solved nor ameliorated the problems associated with the manufacture, distribution, possession and use of drugs. In the intervening 32 years, the Committee has extensively studied U.S. drug policy, consistently finding that the societal costs of drug prohibition are too high to justify. After significant study, the City Bar has endorsed the Marihuana Regulation and Taxation Act (“MRTA”), sponsored by Senator Krueger and Assemblymember People-Stokes (A.3506-B/S.3040-B), as a model for how New York could adopt a marijuana regulatory scheme.

This dedicated section highlights our efforts to issue reports, conduct programs, advocate legislation and otherwise work toward implementing a regulatory scheme for the adult recreational use of marijuana in New York State.  It is intended to be a resource to educate our members and the public about an important policy issue facing New York. To view materials, click on the left side menu: "Reports" for related City Bar reports; "News" for related press releases, blog posts and media coverage; "Events" for upcoming events; "Resources" for past event recaps/audio and related bill and hearing information; and "Of Interest" for relevant studies, data and outside organizations working on this issue.

Letter to Governor's Workgroup to Draft Legislation for Regulated Adult Use of Marijuana from the Drugs & the Law Committee - December 11, 2018

Springtime for Cannabis: 75 Years After the LaGuardia Committee Report, What’s Next for New York?
May 9, 2019

A conversation between policy experts and government representatives to discuss the proposed adult use cannabis legislation. The occasion marks the 75th anniversary of the LaGuardia Report, the first in-depth study into the effects of consuming cannabis in the United States, a study that controverted many of the myths promoted by drug prohibitionists. Presently, New York City and State face a shift to regulating the largest unregulated cannabis market in the United States after 92 years of prohibition. The panel discussed the challenges and issues that arise in implementing the proposed cannabis legislation currently in Albany. Click Here for Event Audio

Re-legalization of cannabis for general adult use in New York City has never been closer, but how ready is the most populous metropolitan area in the United States - and the country’s largest urban cannabis market for commercial manufacture, delivery, home cultivation and over-the-counter sale of cannabis? This panel discussion examines the legal and policy changes that will be necessary in order to make a safe and orderly transition from a criminal market to a viable regulated market. Click Here for Event Audio & Video

Program on how the evolving treatment of marijuana under the law affects the workplace. Learn how legalization of medical and recreational marijuana affect rights and obligations under the ADA, FLMA, and more.  Click Here for Event Recap & Audio

A panel discussion of current events in this uncharted area of law. Click Here for Event Recap & Audio

Regulating Marijuana: What New York Can Learn from Other States
May 21, 2015

This forum explores the inconsistencies between federal, state, and local cannabis law, and their effect by asking whether states and municipalities can influence higher levels of government and, if so, how. Click Here for Event Recap & Audio

The Future of Marijuana Law in New York City
January 28, 2015

An expert panel discusses the past, present and possible futures of marijuana law in New York City. The panel was moderated by Touro Law Center Dean and Professor of Law Patricia Salkin, a land use expert, and featured Stephen Levin and Jumaane Williams, both City Council Members from Brooklyn, and Nitin Savur, Deputy Chief of the Trial Division of the New York County District Attorney’s Office.  Click Here for Event Recap & Audio

Discussion of proposed medical marijuana legislation for New York and the growing body of cases addressing the conflict between state and federal law. Click Here for Event Details

Criminal Justice, Police Reform and Civil Rights section - addresses the intersection of criminal laws, policing and racial justice, and contains information regarding City Bar reports and programming on those subjects.