For information on joining the chorus (Basses and Baritones needed!) please email membership@citybarchorus.org. 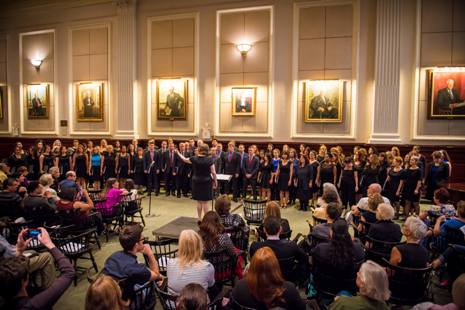 The New York City Bar Chorus is saddened by the systemic injustices faced by the Black community, including the injustices that led to the deaths of Ahmaud Arbery, Breonna Taylor, George Floyd, and countless others. We are brought to our knees by how these unique earthly stories ended.

As the nation debates how to create a more perfect union for all the members of our society, we are reminded that love is the better motivator to bridge our divides.

- Sometimes there are battles that are more than black or white. –

We encourage our listeners and members to use their gifts to contribute. Now is not the time to disengage from our democratic and human ideals. It is the time to embrace thoughtfully the duties those ideals confer upon us.

- Your sword can be a sermon or the power of the pen. –

The New York City Bar Chorus has, for more than 27 years, come alongside the broad and diverse communities of New York City. During this time, we commit to continue our mission to uplift and support our members and the community through music, and we say to you – We see you. We stand with you. Your lives matter.

- And tell them, ‘In our struggle, we were not the only ones.’

Make Them Hear You. When they hear you, I’ll be near you again. -

All judicial officers and employees abstained from participation in consideration of this statement.

“Make Them Hear You,” from the musical RAGTIME, by Stephen Flaherty & Lynn Ahrens

Click here for a performance by Brian Stokes Mitchell, who originated the role of Coalhouse Walker, Jr. in RAGTIME, at the 2019 Kennedy Center special, “Let Freedom Ring!: A Tribute to Martin Luther King, Jr.”

On Saturday, November 7, 2015, the New York City Bar Chorus and The Chicago Bar Association Chorus, two historic "legal choirs", completed their two-city exchange with a concert featuring American music in its many forms, including folk, spiritual, musical theater, jazz and gospel. The two choruses performed both individually and together, combining forces on four songs. To read more about this exciting collaboration, please click here to see our coverage in the Chicago Daily Law Bulletin, and click here to follow our Facebook page! 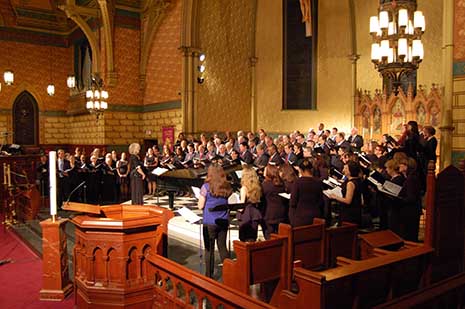 On March 14 and 15, 2015, the New York City Bar Chorus performed at the renowned New York Theatre Workshop, in David Greig’s acclaimed play “The Events,” which has been produced in Edinburgh (where it won a “Best of Fringe”award), London, New Haven and other venues. 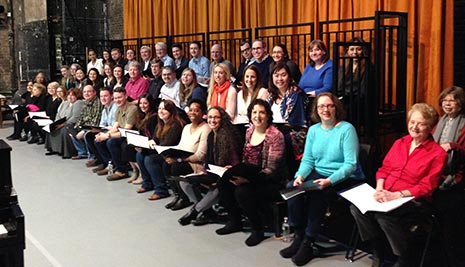 The play is based on the 2011 mass shooting in Norway and the playwright’s observation of Norwegians’ reaction to the tragedy, including their strong community choral tradition. The play imagines that the massacre occurred within a multicultural community choir and focuses on the fictitious choir director’s journey of grief and acceptance. At each performance, a different choir was featured, serving as both participants and “Greek chorus,”performing six songs scored by John Browne as well as one of its own signature songs. The City Bar Chorus provides compassion, comfort and acceptance to its diverse community outreach audiences and was thrilled to serve a similar role in this uniquely inventive and moving production. Above is a picture from the pre-show warm-up.

The New York City Bar Chorus was delighted to host both the Chicago Bar Association Chorus and the Vizcaya Bar Chorus (from Bilbao, Spain) in New York in 2014. 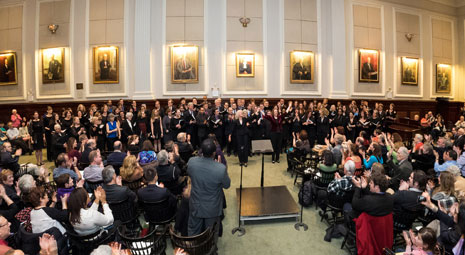 Conductors Rebecca Patterson (of Chicago) and Kathryn Schneider (of New York) leading the final bows at our March 2014 joint concert at the House of the Association with the Chicago Bar Association Chorus.

Conductors Kathryn Schneider (New York) and Karmele Barrena Santamaría (Vizcaya), seated on left and right, with singers from the NYC and Vizcaya Bar Choruses after their June 2014 meeting and jam session.

The 85-voice New York City Bar Chorus (the "CBC"), the city's only "all-legal" chorus, recently celebrated 20 years of serving our community by bringing uplifting, high-energy musical performances to outreach venues across the city.

Since 1993, the award-winning CBC has staged more than 200 concerts at senior residences, homeless shelters, AIDS and cancer patient residences, and pediatric and rehab facilities. Honored by NY1 News as "New Yorkers of the Week," the CBC's leaders and members are all legal professionals – attorneys, paralegals, legal administrators, law students – who volunteer their time and talents to the CBC. Click here for information about our musical director, Kathryn Schneider, and our accompanist, Matthew Grieco.

The CBC's primary mission is to reach out to the community through music. Examples of some of the venues where we have performed include Rivington House (via Lifebeat's Hearts & Voices program); the American Cancer Society's Hope Lodge; Gilda's Club; the Jewish Home and Hospital; the Mary Manning Walsh Nursing Home; the Esplanade, Brown Gardens and Williams senior residences; the Salvation Army Manhattan Adult Rehabilitation Center; and the Visions at Selis Manor program for the visually impaired.

We also sing for luminaries of the bench and bar, including former New York Court of Appeals Chief Judge Judith Kaye and our founder, former New York City Bar President John Feerick, and have appeared on local and national television. We have had the pleasure of performing with our Scottish counterparts, the Faculty of Advocates Choir of Edinburgh, and are making connections with other legal choruses around the world.

Listeners are won over by the CBC's powerhouse, professional-quality sound and exciting, energetic repertoire. Our repertoire ranges from Queen to Dolly Parton, Gershwin to gospel, and West Side Story to Pippin and Wicked. Click here for a selective list of our recent repertoire. A typical CBC show not only has us singing for the audience, but also gets the audience singing with us — through our member-led "sing-alongs," which we customize for each audience we entertain.

The CBC's 20 years of "musical pro bono" service have showcased the kinder faces (and more harmonious voices) of legal professionals. As a goodwill ambassador of the New York City Bar, the CBC has enhanced the civic reputation of the Association inside and outside the legal community. Our group has received several commendations and awards, including an Excellence in Public Service Award from The Hundred Year Association of New York, a longstanding organization that honors those businesses and groups that it feels have enriched the life of the city. You can also view the City Bar Chorus photo gallery, or read articles about Chorus history.

The CBC would like to thank Bryan Cave LLP for generously providing our rehearsal space. The CBC also thanks the ACE Charitable Foundation for support under its "Gift of Time" program.