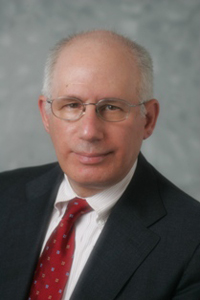 “I think conducting a hostile cross-examination and a jury speech, particularly a summation, are two of the most exhilarating experiences you can have as a human being,” says Dan Kornstein. “How do you cross-examine someone to bring out the lie or the inconsistency or something else? There’s no recipe that tells you how to do that. Some of that is instinct, some of that is knowledge of people, but a lot of it is the creative approach. You’re not going to do it by having a tight script of questions in a loose-leaf. There’s got to be some play in the joints for how you relate to that witness.

But the same thing happens when you’re writing a brief, when you’ve put together something that really hasn’t been thought of before. You finally get it."

Thinking about creativity and the law is Kornstein’s avocation. He writes books about it. His interest began in the mid-80s, when he became aware that a number of great creative artists in different fields had some background in the law.

“I’d go to an exhibit at the Metropolitan and I’d see a Matisse and they’d have a little squib that Matisse went to law school,” says Kornstein. “And the first oil painting that Matisse ever did is called Books and Candle. If you look at it, they look like law books. He was recuperating from some illness at the time and his parents got him some paints.”

Schumann. Cezanne. Jules Verne. Victor Hugo. Fermat, of Last Theorem fame. All had gone to law school, and that fascinated Kornstein: "Would anyone think that Proust went to law school? It's not something that occurs to anybody, and you wonder what a legal brief by Marcel Proust would look like. Would it be interminable? Would it be a sentence that goes on for five pages?"

Kornstein concedes that the explanation for why so many artists had legal training may be simply that law has been seen by parents as a practical and stable career into which to steer their kids. But the connection between law and creativity goes deeper than that, Kornstein thinks, to the extent that law can act as an “Unlikely Muse,” the title of his book on the topic.

“One interesting one, as painters go, is Kandinsky,” Kornstein says. “Looking at Kandinsky’s artwork, one would never think that this was a man who went to law school. You just wouldn’t associate abstract art with that kind of training. Well, Kandinsky was a law professor in Russia while he was interested in art but before his period where he broke out and did only artwork. And he wrote a lot about his journey, and how he came to be what he was. And he credited law school with discipline, the ability to think through things as helping him in his artwork. You look at his artwork, and you would not confuse Kandinsky with Jackson Pollock. Kandinsky seems to be more geometrical, more controlled, more disciplined in many ways.”

Kornstein is convinced that creative pursuits can make you a better lawyer, “because there’s a playfulness in creative pursuits, where you are switching around things in different ways, juxtaposing things that weren’t thought of before, and sometimes you just see the problem differently, you see the world differently, and you get an insight that helps. We have this experience where you’re sort of going along at normal speed, and we come to some sort of stumbling block. But then, whether it’s subconsciously or whether it’s just drilling deeper into whatever it is we’re doing, you go into hyper-speed, you get into that higher level of consciousness, and all of a sudden the pieces fit in a way they didn’t fit before. That’s creativity. That’s something new that didn’t exist. It may not be Nobel Prize winning, it may not be earth-shattering, but it is new and original for the particular thing you’re working on.”

Creativity, Kornstein believes, is what separates history’s great judges, because the solutions they found were not automatically obvious. “Go back to the beginning with John Marshall,” Kornstein says. “Was Marbury vs. Madison foreordained that it would come out that way? No, there was a creative streak in the way he balanced things. On the one hand, he said, the Judiciary Act of 1789 was unconstitutional; on the other hand, he denied the relief to the office seeker. The analysis could have pulled you either way. He had to have some idea—the concept of judicial review—that’s not expressly found in the Constitution. It was something he created, and it’s something that we have grown accustomed to and live with.”

Kornstein believes that litigators don’t get enough credit for shaping some of America’s great judicial decisions, because law is taught primarily from appellate decisions. “One almost is imbued with the idea that to become an appellate judge is the highest and greatest thing one could ever hope to be in our legal system,” he says. His book “Thinking Under Fire” was an attempt to demonstrate that great lawyers can have as much to do with great decisions as great judges.

“You know, the way the NAACP devised the litigation strategy over decades in order to get to civil rights decisions from the Supreme Court and other courts, is an extraordinarily creative thing that didn’t have to go that way, says Kornstein. “Thurgood Marshall prevailed in terms of the strategy. Others wanted to challenge segregated schooling much earlier. But no, chip away until finally it will have to fall. That’s creative, that’s strategic. And not everybody’s going to agree about that. Is that different than writing a symphony? Well, in some ways yes. Is it different than coming up with a new scientific breakthrough or formula? Yes, in some ways. On the other hand, it has many similarities.”

Kornstein’s interest in the connection between creativity and the law inevitably led him to Shakespeare. For his 1994 book “Kill All the Lawyers?” Kornstein scoured 15 of the Bard’s plays for legal themes and explored how they applied to modern times. One of the questions he posed—Was Hamlet temporarily insane when he had all those people murdered?—inspired the City Bar’s Committee on Lectures and Continuing Education, chaired by Norman Greene, to retry the late king of Denmark before a three-judge panel and a standing-room-only house in the Meeting Hall. The assumption was that, contrary to the play, Hamlet survives, but he’s prosecuted by the state of Denmark for murder, using the play as the record. Steven Gillers was the prosecutor. Kornstein represented Hamlet on appeal. The panel of judges included a Shakespeare scholar, Professor Jeanne Roberts from American University; former U.S. District Court Judge Marvin Frankel; and U.S. District Court Judge for the Southern District of New York Kevin Duffy. The transcript, along with the full text of the play, is available in “The Elsinore Appeal: People v. Hamlet,” which was published by the City Bar.

Kornstein had joined the City Bar as a young lawyer in 1974, and, based on his remarkable army experience, the first committee he joined was Military Affairs and Justice.

“After my first year of law school, I was drafted,” he says. It was 1969 and I was a private, but I got assigned to a JAG office as a legal clerk. I wasn’t sent overseas but to a more dangerous place: Texas. Ft. Hood. And we had the first My Lai Massacre court martial. So I was assigned to help the prosecutor. Imagine how fortunate I was. Here I was, I had a year of law school under my belt, and I was writing briefs in the prosecution of one of Calley’s platoon sergeants.”

A decade later, as a member of the Federal Legislation Committee, the City Bar asked Kornstein to testify before a congressional subcommittee on whether men reaching 18 should have to register for the draft. “And it was tremendous fun. What was very special was they assumed that whatever I said, I was speaking for the entire organized bar in New York, and it was an interesting feeling,” says Kornstein.

Kornstein values his committee experiences for these opportunities and for putting him in touch with so many people. “I started out in a big firm, but pretty early on started a small firm, so you look for contacts in the profession outside your own little shop. The bar association and committees are an extraordinarily effective way to do that. Especially when you’re young,” says Kornstein.

Kornstein, 62, sounds like he’s just getting started, saying, “There are an infinite number of things to do, many more books to write and cases to try.” He remains as obsessed as ever with exploring the link between law and creativity, and with getting back in the “zone.”

“I think what happens is it becomes a peak experience,” Kornstein says. “A lot of the writing on the subject of creativity talks about peak experiences. But also in terms of athletes, theatrical performers, musical performers, that they get into a ‘zone.’ You read about Ted Williams batting, where he could actually see the spin of the pitched baseball and look at the markings on the ball as it’s coming in. We think of that as impossible, but we all have lived through certain experiences where time slows down in some sense that’s psychological and you become more than you are ordinarily. And there’s an element of that in the courtroom when you’re doing it right.

“We hope everybody has those experiences. I feel sorry for those who don’t. And sure, we spend most of the time waiting in the wings to have those experiences, but it’s the attraction of getting to that level that makes everything worthwhile. Because when you’re doing that, you don’t care how much you’re being paid. You don’t care about any other obligation. You’re doing something that’s so special, you feel that you were born to do it.”