In May 1951, the Executive Committee resolved that the Association establish an award to be designated as the “Award of The Association of the Bar of the City of New York,” to be presented from time to time to a member of the New York Bar who has made exceptional contributions to the honor and standing of the bar in this community. A special committee was appointed to supervise the preparation of a design of a medal embodying such award, to recommend a method of presentation and also to recommend at what intervals the presentation of such awards should be reviewed. 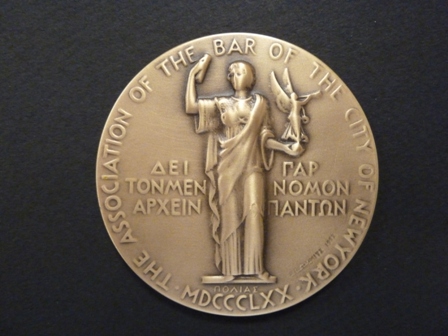 The obverse of the medal bears an adaption of the Association’s Seal: A full-length figure of Athene in her special—and to the Greeks favorite—character of Polias, the guardian of the city, bearing a scroll in her right hand and a winged Victory in her left. The figure is a slightly idealized reproduction of the statue now in the Villa Albani, near Rome. On either side of the main figure is a legend from the fourth book of Aristotle’s Politics, concluding a sentence which reads, “Where the laws are not enforced there can be no free state, for it is essential that the law be supreme.” At the foot of the figure is inscribed the characteristic title “Polias,” and around the seal is the corporate name of the Association, with the date of its organization, 1870. The medal is the work of the American sculptor, C.L. Schmitz.

The Association Medal has been awarded to: